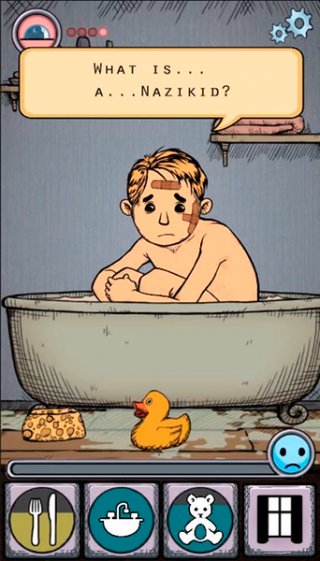 Currently available for iPhone and iPod Touch, My Child Lebensborn is a game that encourages children to take part in a story that takes place in World War II. The game allows them to take part in a series of interactive scenes that foster empathy and compassion for the plight of war children.

Having a child can be difficult. There are many factors to consider. Children are emotional beings. They need attention and care. Choosing a good game can help them develop and learn.

My Child is a video game that tells a story about a child born during World War II. Players take on the role of an adoptive parent to raise a child born into the Lebensborn program.

The game is set in post-World War II Norway. Players adopt a boy or a girl, and then have to care for them as they grow up. The game is designed to foster compassion and teach important lessons. It uses practical mechanics to help players understand the challenges war children face in post-war societies.

My Child is a free video game available for the iPad, iPhone, Windows, Xbox, PlayStation, and Android. It was developed by Sarepta Studio.

Among the paid apps on the AppStore, My Child: Lebensborn secured the top spot. The story follows a seven-year-old child living in Norway after World War II. Its story line captures the hardships of post-war Norway, including the effects of bullying.

During the war, fascists used local women as incubators. The Lebensborn program was set up to increase the birth rate of Aryan children. However, after the war, the children were rejected by their countries.

My Child: Lebensborn is an emotional game that explores the devastating effects of war and bullying. It is a game about love, hate, blame, and innocence.

The game offers players the chance to adopt a child. In order to raise the child, the player must earn money and provide food, clothes, and other necessities. The game is also designed to help players balance their lives.

Taking care of a child can be a challenge. You need to provide food, clothing, and bathe them in the name of health. You also need to find a way to earn some money to fund your efforts.

My Child Lebensborn is a social simulation game that teaches players how to care for a child. You play as an adoptive parent of a Lebensborn child. This game is inspired by a real life event that happened after the end of WWII. You will play a part in helping your child grow up in a society rife with cruelty.

The My Child Lebensborn iPhone game isn’t for everyone. This is a game that requires a little patience and a good amount of wiggle room. This game will require you to make many small decisions to help your child grow into a thriving adult.

During the war, Nazis started taking children for German ancestry. Their program, dubbed the “Lebensborn” programme, was a polar opposite of the Holocaust. It was aimed at breeding the racially pure “Aryan” population.

The program, which lasted from 1939 to 1945, mainly focused on occupied north-eastern Europe. It took advantage of unmarried teenage Aryan women, and recruited German soldiers to father their offspring.

The program also accepted the biological parents of these children as “racially valuable” and provided them with a racially pure life. It did not produce the expected number of children, however.

Preventing a child from playing

During World War II, the Nazi Party created a program to raise children. Known as the Lebensborn Program, the program fathered children in German-occupied countries. After the war, these children were adopted in Norway.

My Child Lebensborn is a game set in 1951, where players take on the role of adoptive parents raising a child. Players have the responsibility of providing for their child, feeding and cleaning them. They also have to manage their income and resources.

The game’s storyline depicts the hardships of children in post-war Norway. The game shows the daily life of the child, including food preparation and harvesting fruit from the forest. The game’s plot is based on the real experiences of the Lebensborn children.

The game uses a budget management system. Players have to balance their meager post-war income with the expenses of taking care of their child.