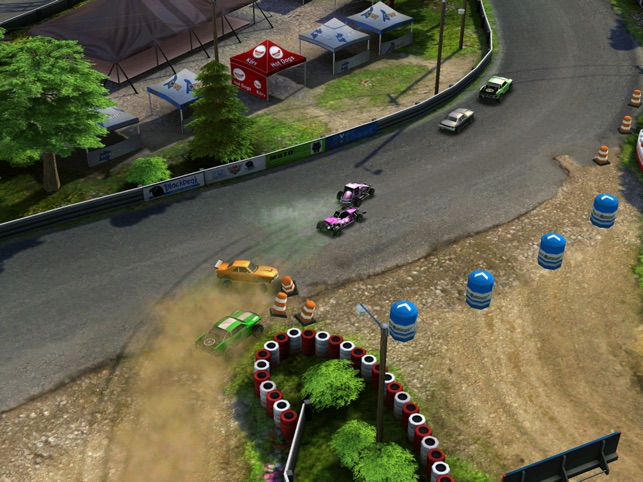 Whether you’re looking for the latest and greatest racing game or simply want to play a few races with friends, the Reckless Racing 2 game offers a lot of fun. There are several different modes to enjoy, including multiplayer and career mode. There are also some great DLC packs to purchase if you want to really customize your experience.

Whether you are looking for a single event or multiplayer, you will find plenty of choices in Reckless Racing 2. This is a mobile top-down racer that offers a full range of game modes. It has an upgrade system and a comprehensive career mode.

Reckless Racing 2 features a plethora of upgrades for each vehicle, such as new tires, transmissions, and coats of paint. These can be bought with cash earned from races. The player can choose to enable auto-acceleration or turn off the feature.

Players can compete against other drivers over the Internet. They can join a pre-existing game room, or create their own.

Reckless Racing 2 also includes an arcade mode that lets you complete various challenges. The game is also backed by a dynamic difficulty system. This raises the difficulty level based on the performance of the player.

Compared to the original Reckless Racing, Reckless Racing 2 includes an expanded career mode. In the single player career mode, players lead a driver from an upstart to an established world champion. The player’s progress is tracked and rewarded with cash, which can be used for upgrades or new vehicles.

Reckless Racing 2 has a dynamic difficulty system that raises the level of difficulty based on performance. This system can be turned off if a player doesn’t like it. The game has three different modes for single race play: Arcade, Hot Lap, and Single Event.

In the arcade mode, players compete against other players on an array of tracks. The goal is to beat the best lap time. There are also predefined challenges to complete. The challenges are a mix of races, missions, and other events.

Featuring an improved graphics package, a revamped menu system and a plethora of upgrades for each car, Reckless Racing 2 is a step up in visual quality from its predecessor. It still boasts an excellent selection of vehicles and tracks, along with a comprehensive career mode.

Reckless Racing has been a favorite amongst mobile gamers since its release in early 2010. The top down driving simulator features a diverse range of vehicle choices. A career mode allows players to complete a set number of races over a variety of tracks, earning cash that can be used to purchase new cars. In addition, the game has a multiplayer mode that allows up to three players to compete in local or online races.

Reckless Racing 2 also boasts an innovative Arcade mode. The game includes a variety of challenges, which can be completed by completing the appropriate number of moves. It’s not hard to see why this game is one of the most popular racing apps of all time.

Having said that, it would be a disservice to not mention that Reckless Racing 2 offers a whole slew of new features. This includes an updated driving model, an arcade mode and a career mode. It also has an upgrade system for each vehicle, which is great news for racers.

The upgrade system offers a bevy of options, including new paint, tires and transmission. These can be bought with money won during races, which is a cool way to get the most out of your vehicle.

Another novelty is the new Gymkhana mode. It’s a precision stunt driving mode that pits cars against trucks and buggies in a mix of starts. It’s a pretty fun game, although it does require you to nail the right corners.

Featuring a plethora of vehicles, tracks, upgrades and online multiplayer, Reckless Racing 2 delivers a new look and feel to a classic power slide. Its dynamic difficulty system raises the difficulty based on your performance. The game also includes online leaderboards, multiplayer and text chat before and during races.

A full career mode allows players to earn money and purchase new cars. Players can choose from over 20 highly detailed cars. Each vehicle is unique, and offers various upgrades. In addition to the main career mode, the game features two other modes. The Dirt Rally mode involves racing against other drivers in a multi-lap sprint to finish.

The game also features a time trial-style Hot Lap mode. This mode challenges players to complete a series of pre-set challenges. Each challenge cup awards money that can be used to purchase a new car.