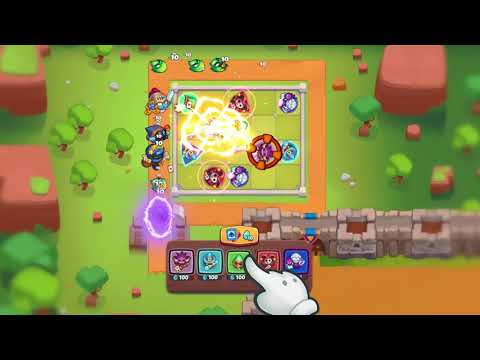 Having been a fan of tower defense games, I was excited to give Rush Royale: Tower Defense TD a try. It’s not easy finding games with a good balance of both strategy and fun, so I was pleasantly surprised to find that this game had both. This app offers a great selection of towers to choose from, and has several different modes to play through. Plus, you can even play against other players. If you’re looking for a new game to play on your smartphone, then this is one that you should consider!

Rush Royale is a game that requires a bit of thought and luck. Basically, you have to protect an area of the game from monsters. You can use a variety of different armies, including the mighty wizard, to make your defenses as strong as possible.

The game offers a few features that stand out from the rest. One of the more useful is the ability to buy the game’s best cards. These can be used to boost your hero’s abilities and to increase the odds that you win the match.

Another notable feature is the duel mode. This allows you to team up with someone to defeat the bad guys. There are also various rewards to be won, such as gold and trophies.

The best part about Rush Royale is that the graphics are quite nice and that the gameplay is actually a breeze. This is because the developers at MY GAMES have made sure that the game is not only easy to play, but also fun.

RNG or Random Number Generator is not a new concept in games. In fact, RNG has been used in many video games to great effect. For example, Randomness is present in tower attacks as part of a damage type family.

It is also a fact that most combat systems use random number generation to some degree. So, it is no surprise that the game Rush Royale is chock full of randomized elements. Moreover, there are some impressive feats that the developers have tucked away in the app. One of the more interesting is the random hero selection. Another notable feature is the pvp die. This will randomly assign a unit to each player.

In the end, the true cost of a successful roll of the dice is oftentimes a matter of personal choice. That is why it is important to understand the pros and cons before making a final decision.

If you’re looking for a fun tower defense game for your iPhone or Android, then you should try Rush Royale: Tower Defense TD. This is a PvP game, which means that players can compete against each other in a real time battle.

In this game, you’re tasked with controlling a kingdom and defending it from incoming waves of enemies. To do so, you need to build towers. These can be merged into stronger units. You can also use these towers to fight legendary bosses.

The game has cute units and unique abilities. However, the structure of the game limits your ability to add new units.

Aside from that, there’s also a co-op mode. With the help of your partner, you can defend a single life against a team of multiple opponents.

One of the most enjoyable aspects of Rush Royale is its graphics. It looks like a cute merge game.

The Isle of Rhandum is a land filled with mayhem and magic. Here, players must choose from a selection of TD warriors and build a strong defensive deck. They will then be tasked with defending their territory and defeating opponents.

As the game progresses, players can upgrade their hero’s abilities and powers. In addition, they can take on quests. These quests will help them earn rewards. Players can also join clans to form a stronger defense. It is also possible to compete with other players in PvP tower defense.

Rush Royale is a unique twist on the classic Tower Defense gameplay. It combines elements of strategy and RPG. It also offers a refreshing take on the familiar touchdown game.

To play Rush Royale, you need to have a well-rounded and powerful deck with heroes, fighters, archers, and other units. You must also think strategically in order to break your opponent’s defenses and exploit your opponent’s weaknesses.