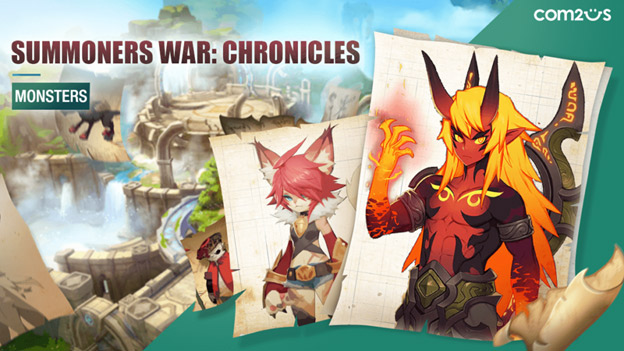 Whether you’re just starting to get into card games, or you’re already an avid player, you will definitely find something to love about Summoners War: Chronicles. The game is full of amazing artwork, and the gameplay will keep you coming back for more.

Unlike most mobile MMO games, Summoners War: Chronicles includes a real time combat system. This combat system features a player character and up to three active summoned monsters. The player can move their character around the battlefield, while the monsters can auto cast their abilities.

Summoners War: Chronicles has a large variety of monsters, which are unique in their qualities and abilities. Choosing the right combination of monsters can make or break a battle. The game also features an expansive single-player experience. There are five regions, each with a unique quest and a challenging co-op quest.

The combat system has some cool features, such as the ability to use skill tokens and summoning scrolls. Players can also create their own team of three monsters and attack a boss monster. In addition, there are PvP Arenas, strategic dungeons, and side quests to complete.

Another fun feature is the “auto-farm,” which allows you to do other things at the same time. You can look at magic shops, send friend points, collect gems, and more.

Featuring a prequel to the entire Summoners franchise, Summoners War: Chronicles is a cross-platform MMORPG that has reached the top of the App Store and Google Play charts. It is also available for PC through Steam and HIVE.

Players can customize their characters with different abilities, but they cannot change their weapons in between active battles. They can also team up with friends to fight against enemies. The combat system is a blast, but at higher levels, it gets a bit tricky.

Summoners War: Chronicles features five different open-world regions. Each has a different setting, and all of them contain a variety of monsters. Each region has its own set of side quests. The main story involves three young Summoners from Rahil Magic Academy.

Summoners War: Chronicles is free to play, and the game includes in-app purchases. There are three character classes. The characters have their own unique abilities, but they blend together with the monsters.

Whether you are a PC player or a mobile one, Summoners War: Chronicles offers you an all-encompassing experience. It features open-world regions with a variety of players-vs.-players arenas and a full-blown Brawl Arena for real-time combat. You’ll be able to team up with other Summoners to complete quests and defeat Raid Bosses. You’ll also be able to explore five different maps with a diverse array of monsters.

Com2uS, the leading global game developer, is introducing a new cross-platform game called Summoners War: Chronicles. The prequel to the popular Summoners War: Sky Arena RPG series, it’s set in the fantasy world of Rahil. In the game, players will become recent graduates of the Rahil Magic Academy and embark on an adventure to protect the kingdom.

This new game is a full-featured MMORPG that’s available for PC, Mac, iOS, Android, and Windows Phone. It’s free to play with in-app purchases. You can download it from Google Play Games, the App Store, and HIVE for browser play.

Originally launched in Korea, Summoners War: Chronicles is the next MMORPG in the Summoners War universe. Set many years before the first game, it features a diverse roster of monsters and challenging co-op quests. It is also a cross-platform title, meaning you can play on mobile devices and PC.

The game takes place in the Rahil Kingdom, which is a fantasy realm recovering from two great wars. It’s now regaining peace, but an ancient relic has been spreading across the land and has the power to tear open the Rift of Worlds. A mysterious enemy emerges with a plan to destroy it. In order to stop this plot, the forces of the Galagons are assembling to recover the relic.

In addition to a diverse roster of monsters, the game features an expansive single-player experience. You’ll have the opportunity to explore loot-filled Dungeons, solve traps, and compete in Raids. There are five regions to choose from and there are side quests in each one.